Leaving Time by Jodi Picoult
I haven’t read a Jodi Picoult book in awhile. Usually I need a box of Kleenex and three weeks emotional recovery time after I finish. Her books haunt me. They’re heavy.
When I saw this book on a list for 2014’s best reads, I thought I’d give it a go and I wasn’t disappointed.  Unlike a typical Picoult read, it wasn’t as raw and emotional as some of her other books but I actually enjoyed it more.
Leaving time is smart and engaging. It draws you into a narrative about a young girl on the search for her missing mom with the help of a washed up psychic.  Each character is carefully woven into the plot and Picoult keeps you guessing until the very end. It’s a tale of grief and loss, but one also of love and redemption. It will leave you thinking about its characters long after it’s conclusion.
Eleanor and Park by Rainbow Rowell
I read this book a few months ago and the weight of it still lingers in the air around me. The characters are so unexpected – it makes you feel something deeply for them that you just can’t shake.
Eleanor and Park don’t start out on friendly terms. Eleanor is a bit of a mess, to say the least, and Park is a bit of a hipster still trying to find his own way. They connect over comics and a shared taste in music, and find out that they have more in common than first meets the eye.
This book is young love at its best and equally enjoyable whether you’re a teen yourself or a just young at heart.
Dear Daughter by Elizabeth Little
Gone Girl fans will love this debut novel by Elizabeth Little. I’ve read several other titles that make similar claims, but this one has the same gritty, crafty storyline that will keep you up all night wondering what happens next.
Janie Jenkins is the perfect protagonist. Despite several marked character flaws you just can’t help but cheer her on and hope it all works out for her. On the run from the media after her release from jail, she finds herself in a quaint little town that appears to be the perfect place to get away from it all. As she attempts to unearth some old family secrets she may just discover what sets her truly free…
Big Little Lies by Liane Moriarty
I have been a Moriarty fan since 2012 when I first picked up What Alice Forgot at my local supermarket. Since then I’ve read every novel of hers ever published – each one unique. This novel might just be my favourite though.
As a teacher myself, I loved the hilarious depiction of a community of parents that have lost all perspective when it comes to involving themselves in their children’s education. As a mom, I relate to the uncertainty that every day brings and the tremendous responsibility it carries to be a role model for your kids.  As a woman, my heart broke during the deeply emotional depictions of heavier relational themes.
This book has it all. It’s a must read and should be at the top of everyone’s list for 2015.
One Plus One by Joyo Moyes
This one admittedly, starts out a bit slow. I spent about the first third of it wondering what it was actually about. It seemed as if several parallel stories existed in isolation and I questioned how it was all coming together.
After the initial hump though, Moyes has you in her grip as two unlikely companions travel across the state in search of far-fetched dreams and to escape their current realities. Cramped quarters and conflicting personalities make for an interesting tale about the intersection of two souls coming together to make right the many wrongs overtaking their lives.
Bonus:
Blink by Malcolm Gladwell
This may not be the typical “summer read,” but you won’t regret picking this one up. Gladwell masterfully crafts his book around the idea of ‘thin-slicing’ everyday experiences; learning when to trust your instincts and when your instincts are disrupted by stress than can overwhelm logical response.
What can be gained from the almost imperceptible information accumulated in the blink of an eye? Is it possible to predict the success rate of marriage based on only a few minutes of marital conversation? Can we learn to manage stress responses to better react in emergency situations?
Trust me, there is so much information you’ll take away from this book that the moment you finish you’ll want to read it again.
The Good Enuf Mommy 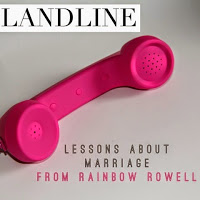 Landline: Lessons About Marriage From Rainbow Rowell
Recently I was reading Rainbow Rowell’s newest book Landline,where the main character has the unique ability to talk to her husband of 1998 through a landline at her mom’s house. It is through this phone that she finds a gateway to the person he was, who she used to be, and who they have become – together.

« The Problem with Maybe: A Case for Decisive RSVPs
Top Six Fine Dining Restaurants in Calgary: From a Girl Who Has Tried Everything »